Taking a journey and honoring the dead 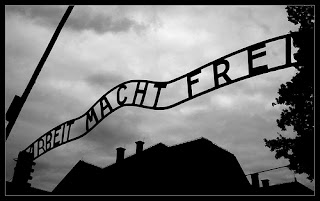 It’s Friday and time yet again for another posting of Interesting Jewish Stories & Facts (IJS&F). Several years ago I visited Auschwitz during a trip to Eastern Europe with members of my Synagogue. Here’s what we saw.
It was hot and I was tired, emotionally drained after an afternoon of touring Auschwitz-Birkenau, the Nazi death camp about 40 miles west of Krakow in southern Poland.

As I stared out across a huge field where so many had suffered and died, I was momentarily startled by the blast of a shofar – the traditional ram's horn that is sounded during Rosh Hashana and Yom Kippur services each year. I turned and saw the leader of our group, Rabbi Shalom Lewis of Congregation Etz Chaim in east Cobb County, holding the horn to his lips, blasting away at the pain and darkness of this place.

Thirty of us, all from the Land of Cotton, were traveling across Eastern Europe on a congregational trip sponsored by Etz Chaim that was equal parts vacation, heritage tour and traveling marathon. The plan was to visit five cities of note across the region – Warsaw and Krakow in Poland; Budapest, Hungary; Vienna, Austria; and Prague in the Czech Republic. We would immerse ourselves briefly in the local culture and spend time wandering the cobblestone lanes and picturesque corners of these ancient and charming communities; but the focus would be on the past, the rich Jewish heritage that was once a vital piece of this part of the world.

It was understood that there was a dark, melancholy side to all of this, that the trip would carry a hefty load of emotional baggage. After all, the Jews of Eastern Europe, their culture and way of life were systematically destroyed by the malevolent power and madness of the Nazi war machine more than 60 years earlier.

The scope of the destruction is difficult to comprehend. It began slowly in the 1930s with a series of draconian measures aimed at isolating and demonizing the Jews of Germany, picked up speed with a government-sanctioned pogrom in 1938 that came to be known as Kristallnacht, and found its stride a few years later with the creation of a sprawling complex of concentration and forced-labor camps that quickly morphed into factories of death.

By the end of World War II, nearly 6 million Jews from across Europe had been rounded up and killed. In Poland, one of the leading centers of European Jewry before the war, nearly 3 million Jews were caught in the Holocaust, slaughtered by special commando units or in ghettos and concentration camps.

UNCOVERING THE PAST
Auschwitz – the German name given to the nearby village of Oswiecim after Poland was invaded and conquered in 1939 – was the largest death camp constructed by the Nazis. It remains one of the largest graveyards in the world. Nearly 1.5 million people, mostly Jews, were murdered here, their bodies and ashes dumped into mass graves.

Arriving at the camp is a surreal event. The past hovers uneasily on the edges of an expansive parking lot, hidden by tour buses, cars and tourists enjoying a quick lunch. Our group works its way through the crowd to the camp's welcome center and a bustling cafeteria, shaking off the four-hour journey from Warsaw. A buzz of languages – English and Polish, Hebrew, French and Slovak – spills about us like canned chatter from a gathering of the United Nations.

We dine on overcooked chicken schnitzel and so-so pizza, happily talking about our first days in Poland and the adventures that still await us farther south across the Slovak border in Hungary, Austria and the Czech Republic. But it's the past that captures our attention when we finally settle down inside a small auditorium to watch a film on the liberation of Auschwitz.

We begin our afternoon's journey into darkness, assaulted by images of the Holocaust – long lines of weary, brutalized people staring through barbed-wire fences; children rolling up their sleeves to reveal numbers tattooed on their arms; piles of clothes, spectacles and luggage; and piles of corpses decaying in open pits.

Back outside, the black-and-white images of the film spring to life in color as we walk toward the camp's entrance, the buildings, roads and landscape impeccably – some might say obscenely – manicured, still wrapped in barbed wire and ominous warnings of electrified fences.

THE BIG LIE
We read the same sign that welcomed the legions who died here, "Arbeit Macht Frei," work makes you free, the Nazi lie that this was a work camp and that hope still existed in a world at war. Our guide, Alicja Tarowska, points out the "b" in Arbeit and asks if we notice anything unusual. After a moment it becomes clear that the letter had been put in place upside down; a little annoyance, Tarowska says, offered up by an inmate to irritate his captors.

Auschwitz I, along with Birkenau, Monowitz and 39 subcamps, would eventually hold more than 100,000 prisoners – Jews, Russians and Poles, Gypsies, gays and others that the Third Reich considered "undesirables" – and become the graveyard for well over 10 times that number.

We shuffle along the crisscross grid of roads in the main camp with other groups of tourists, peering into barracks that house a series of horrors – the piles of hair, eyeglasses and luggage seen in the introductory film, now on display behind huge walls of glass, and torture chambers, including a claustrophobic "Standing Cell" where prisoners were forced to spend nights together, unable to move, hardly able to breathe.

I'm awake but caught in a nightmare, wandering through rooms where horrific medical experiments were conducted by Josef Mengele, the sadistic Nazi physician, and his colleagues; past a killing wall in a small courtyard where political prisoners, religious leaders and others were executed; then back into a barracks, the "Death Block," where some prisoners were held without food or water until they died of starvation.

It was here, I learn, that the Nazis first tested the toxic gas Zyklon-B, a pesticide initially used at Auschwitz to fumigate barracks and disinfect prisoners' clothes. The test proved hugely successful and offered the means for the Germans to put in place their master plan, the Final Solution, to wipe out the Jews of Europe. It was a plan that took form only a few miles away, at Birkenau, also known as Auschwitz II, a 10-minute bus ride from the main camp.

A PLACE OF DEATH
We arrive somewhat dazed, still filled with images of death from our first stop, not prepared for the brutal reality that awaits us. We stand in a parking lot, directly across from a low-lying brick structure that looks vaguely familiar. We walk toward the center of the building and see train tracks that run through a distant field, shimmering in the afternoon heat and fading in the distance.

The scene is one of the lasting images from "Schindler's List," Steven Spielberg's award-winning film about the Holocaust, and the focus of numerous other theatrical films and documentaries, plays and novels, memoirs and nightmares. This is sacred ground, the uneasy resting place for a million souls. And it's huge.

The camp spills across hundreds of acres, divided by train tracks and subdivided by rusting fences. A few rows of wooden barracks remain, the debris of hundreds of others – each pinpointed by a crumbling chimney – stretches across a grass covered field, clumps of wildflowers jarringly framed by strands of barbed wire.

"Of course there was no grass here when the camp was operating," Tarowska says. "People were starving and they would eat it."

They were the lucky ones, not yet consumed by this killing factory. Most died shortly after arriving, ordered off the cattle cars that pulled into the heart of the camp and into lines where it was decided who would live and who would die. We stand on the spot where Mengele, infamously known as the Angel of Death, often made the daily selections, then follow a path leading to a pile of rubble, all that remains of Birkenau's killing machines.

As the war continued and the tide of battle turned in favor of the Allies, Nazi planners were gripped with a renewed urgency to rid the world of Jews. Transports increased and additional gas chambers and crematoriums – there eventually would be four facilities at this camp – were constructed.

Those selected – a brutal, capricious exercise that always included children, women with babies, the elderly and ill – were marched into underground changing rooms, ordered to strip, then locked into huge gas chambers that were disguised as showers. They were murdered and removed to nearby crematoriums. When all was up and running, 20,000 people could be pulled from cattle cars and turned to ash in a single day, a stunning figure that captures the cold efficiency and pure evil of this place.

Standing alongside the ruins of the crematoriums in the late afternoon, the sun dipping below a row of birch trees that tower over the back of the camp, our group huddles together for comfort and a short memorial service. We recite a few psalms and read a poem, light a memorial candle, and together say the mourners' kaddish, a special prayer for the dead.

I turn away, gazing across the tracks and the nearby fields surrounded by barbed wire, momentarily lost in thought about the past and the Holocaust. The wail of the shofar grabs my attention. The sound echoes and magnifies the ache in my heart and I see that others around me also are moved, a few wiping away tears of sadness and anger.

I shudder, recalling the words of a memorial plaque I walked past moments earlier and that I can still see off in the distance, resting below a tortured sculpture of a smokestack. "For ever let this place be a cry of despair . . . And a warning to humanity."

I whisper a silent amen.
Posted by Nor Grebnief at 12:01 AM 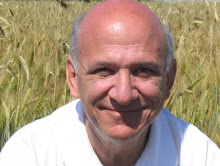 Nor Grebnief
Atlanta, Georgia
I’m a veteran journalist who once upon a time worked for newspapers across the Southeastern United States. The bulk of my 40-year career was in the Land of Cotton, a hot and humid place of cars and highways, skyscrapers, shopping malls and restaurant chains. It also has expansive green spaces and parks; walking, hiking and biking trails. Fortunately for me, I now get to spend most of my time living and enjoying life instead of just writing about it.